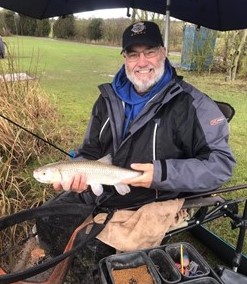 Pat Byrne at his Mill Cotton Fishery in 2020

There are times when life’s challenges make you think and this is just one of those moments. Pat Byrne, from Northampton, was one of the country’s stalwart coaches and respected life coach. His sad passing at the age of 68 and the outpouring of love from heartbroken parents reflects the influence he and his fellow coaches had right across the East Midlands and further afield.

I first came across Pat with his mate Bryan Dray back in 2016, as part of the developing Nenescape Lottery bid within the Nene Valley. To watch him develop with his fellow coaches and see the growth of junior membership with his Wellingborough & District Nene Angling Club is a clear legacy to be proud of.

Pat was almost always accompanied by his buddy Bryan, a fellow who looked (indeed still looks) remarkably like one of the Hairy Bikers. Before long, someone had decided to refer to Pat and Bryan as the Chuckle Brothers, a name which stuck. They were aided by coach Ian Halliwell, who brought a little more angling skill into the mix.

Pat’s strengths was not actually his fishing ability, but his natural ability to build a rapport with young people, whatever ability. He never claimed to be England’s next Bod Nudd, he took the view that others in his Wellingborough coaching team could develop participants to the next level in fishing, if that was the right thing for them.

As time went on and I observed his team in action more and more, it steadily sank in that he and Bryan had one amazing attribute, namely a natural ability to create rapport and subsequently successfully engage with young people. Some of the young people that Pat worked with were classified as having special educational needs. More often than not, Pat could communicate in their language. It taught me something profound and yet fundamentally simple, if coaches cannot engage with participants, then all the technical fishing expertise on the planet will never get put to good use.

I remember back at the 2020 Nenescape AGM, Pat and Bryan had the audience in stitches with their Chuckle Brothers rapport about their coaching exploits.

‘Come on the Fishes’

Pat’s was arguably an idiosyncratic coaching approach involving, amongst other things, cartoon fish and the periodic cry of ‘Come on the Fishes’. What matters is getting results, especially the right results. Pat and Bryan’s approach to angling coaching with new prospective participants worked.  They developed young people with the fishing habit, improving self-esteem and quality of life in the process. This is the health and wellbeing benefits of fishing in action. How can I claim this with such confidence?  At the end of the day, Wellingborough’s consistently growing junior membership figures and with their increasing contribution to angling participation, Angling Times readers voted Wellingborough as the club of the year back in 2020.

Both Pat and Bryan have helped influence the collective thinking around ensuring the fun element was an integral part of any coaching, whether it be a youngster first time fishing or taking part in some national event, and what has developed into the largest UK junior angling celebration event hosted by the Canal and Rivers Trust. Pat was always at the front of house making people laugh.

For the last few years, Pat has engendered so much joy, humour and passion into the Let’s Fish programme and Nenescape scheme as a whole. Alongside his team mates Bryan and Ian, he brightened every event he attended. A few months ago, during the Nene Valley Festival, I bumped into Pat and team doing what they do best, positioned with a Let’s Fish stand at the edge of Wellingborough Embankment. The weather had been indecisive all day, but at this moment was offering up a splatter of rain and blowing leaflets across the table, but we could see Pat’s grin from across the car park. Bryan and Ian cheerfully welcomed us from behind the table and Pat was coaching a young brother and sister with their rods in the water. The team had been there all morning. The children’s’ parents sat happily watching from their camping chairs, a homecooked feast laid on a picnic blanket next to them. The family, it turned out, were regulars to their events and such fans of Pat and team that they had prepared lunch parcels ahead of time, for them too. To onlookers it may have seemed such a banal set-up, but it spoke volumes to us in the know; it was a reflection of what Pat and the team created through their activities.

The effect of Pat’s generous spirit, and obvious enjoyment in helping others provided a welcoming environment to all. Regardless of personal circumstances or challenges, Pat managed to provide a space and place for young people and their families to take time to be together, away from distraction and pressures of everyday life. I know that Bryan and Ian continue to carry this spirit through everything they do. We have been so privileged to have worked with Pat and his absence will be felt for some time to come.

Pat would definitely not want his passing to be the beginning of the end of junior fishing at Wellingborough, rather he would want it to be seen as merely the end of the beginning. We will be working with the Wellingborough team and the Canal & River Trust will support Bryan, Ian and other members of the coaching team in any way we reasonably can. We will endeavour to find a way of developing a tribute to Pat, so his legacy is not forgotten.

“Pat was a fantastic man and it was an absolute pleasure to get to know him through our work to try and get more people into fishing. His passion and commitment as a licenced level 2 angling coach was incredible. He did an amazing job in creating more opportunities for people to get into fishing across Northamptonshire through Wellingborough & District Nene Angling Club, providing the ideal place for anyone to get into the sport.

“In support of the Let’s Fish, Get Fishing and Nenescape campaigns, there is no doubt that Pat has been directly responsible for helping hundreds and hundreds of people get into and keep on fishing.” 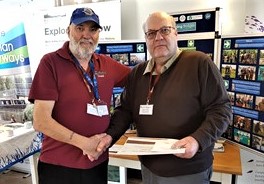