Anglian Water’s “disproportionate” ban on fishing from the dam at Grafham Water is to continue despite best efforts by fly fishing clubs and the Angling Trust to overturn the decision.

Anglian Water banned fishing from the dam late last year following an extremely rare incident where a visitor was hooked by an angler’s back cast.

Following a face-to-face meeting at Grafham Water on the 2nd March and despite several letters from the Angling Trust, the Grafham Water Fly Fishing Association and the Invicta Fly Fishing Club, Anglian Water have taken the decision to continue with the ban.

The clubs also stressed their willingness to cooperate in precautions to keep anglers and walkers a safe distance apart and, along with the Angling Trust, emphasised how important the dam is to many anglers, particularly those with limited mobility.

Martin Brocklebank, Club Captain at Grafham Water Fly Fishers, who has fished at Grafham for many years, expressed his sadness at the closure.

He said: “Over three years ago I had a spinal collapse caused by a terminal bone cancer called Multiple Myeloma.  As a result, I became quite immobile and had to retire on health grounds. I was devastated to say the least. I spent many months in treatment and learning to walk and generally cope with life in general.

“Angling has always been a passion and after regaining the confidence to go out fishing I managed to find locations that were suitable for my disability. I have balance issues so need to be on relatively flat ground.  For ease of access, and my own safety, I tend to fish the dam when possible. There are very few other places on the banks at Grafham Water where I feel safe to fish due to rocks, steep banks, uneven surfaces, and areas of slippery mud that could cause me to have a serious fall. I would rate the dam as one of the finest places to catch trout in the UK.

“For me, with my disability, the dam affords me ease of access, a good surface to walk on despite the slight incline and a place where you can be seen.  I am one of many anglers who I would describe as having limited mobility or disabled that regularly use the dam to fish.  Being able to fish the dam has been good for my wellbeing. I manage to get out of the house, go fishing, meet other anglers and improve my fitness level by walking.  I would often be there two or three times a week even if only for a few hours.

“I recently attended a meeting between Anglian Water and the local fishing club.  We were hoping there would be a discussion and some form of compromise, but this was not the case sadly. I came away from the meeting terribly deflated and devastated quite honestly.  This decision will certainly have quite an impact on my overall wellbeing as it will reduce the amount of fishing I am able to do at Grafham Water.

“I have for the past few weeks become quite depressive and lost the enthusiasm to go fishing. I medicate at night so getting out early in the morning would be difficult for me. The new season has opened at Grafham Water. If there were reasonable access to fish the dam, I am sure I would have already cast a line or two.

“I hope that in time Anglian Water will reconsider their position and allow anglers and in particular disabled anglers more access to the dam.”

Both clubs are disappointed at Anglian Water’s unwillingness to end the ban but continue to seek a reasonable and proportionate solution going forward.

“The current situation at Grafham dam will have a profound impact on many of our members. While Anglian Water do not deem the dam suitable for anglers with restricted mobility, it has in practice provided level and safe access and has been fished by countless anglers without incident. The dam offers access to deep water, consistent sport through the season, and the ability to fish without the need for wading or negotiating steep and stoned banks to gain access to the water. For many of our members it is the only option for them to fish Grafham.

“The recent change in access has been brought about by one incident of contact with the general public. According to Anglian Water, this is one of four reported incidents in the last six years.  In that time many hundreds of thousands of pedestrians have safely used the path above the dam with anglers using the dam without restrictions.  We believe that given the level of risk posed, the action taken is out of proportion and that other mitigations such as proposed by GWFFA could be implemented to retain safe access for all parties.  We have been advised that full access will be reconsidered when the water level drops to a level deemed to be safe.  However, no timeline has been given on this and if levels remain high then it is unlikely that we will see an improvement to the current access.

“In conclusion, we appreciate that Anglian Water are looking to work with us to make some improvements to other areas of the banks where access has been lost over time; however, none will replace the dam which for many of our members remains the only place that they can fish. This is a great disappointment as Grafham is one of the best trout fisheries in the UK, but now excludes by this action some of its most loyal and long serving customers and overturns the historical access to the dam which has lasted for over 50 years.”

“Invicta Fly Fishing Club was formed over 40 years ago by fly fishing enthusiasts who fell in love with the newly created Grafham and Rutland reservoirs and the world-class trout fishing they provide. Since then, the dam at Grafham Water has been a favourite and productive place to fish from the bank.  For some, it is the only place because they are unable to wade or scramble down the near-vertical, unstable reinforced banks around the rest of the lake.

“All Invicta members were devastated when Anglian Water announced a ban on fishing from the Grafham dam last November. Invicta worked tirelessly with the Angling Trust to convince Anglian Water that fly fishing is a gentle art, any risk is extremely low, and that fly fishers and other visitors have co-existed happily for half a century.  We proposed some additional precautions, but these were rejected out of hand.

“We are pleased Anglian Water have now accepted the risk disappears when the water level drops. Unfortunately, we are still waiting for them to announce this ‘safe’ level when fishing will be permitted again.  Overall, the whole episode has left a bad taste in the mouth and made loyal anglers feel like second-class customers.  We have not given up and hope that common sense will prevail.”

“As more and more people take advantage of the benefits that being out in the countryside afford, particularly from being by water, conflict is likely to arise between different users. Organisations, like Anglian Water, need to work with all users to find reasonable and proportionate solutions to avoid or minimise these conflicts and allow all users safe access.

“The Angling Trust will continue to support the angling clubs at Grafham Water and to urge Anglian Water to revisit their decision to close the dam and to work with anglers to find a better solution for all users.” 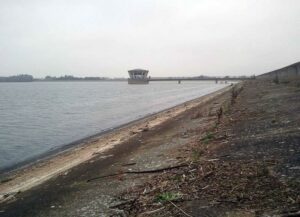