Representatives from the Angling Trust and Bluefin Tuna UK met with Fisheries Minister Victoria Prentis today to press for a continuation into 2022 of last year’s successful bluefin tuna CatcH And Release Tag (CHART) programme which ran in the South West of England. They were delighted to hear that the minister has now approved the programme for another year in parallel with a consultation on a future live release recreational fishery.

The delegation comprised Steve Murphy of Bluefin Tuna UK and Jamie Cook, Stuart Singleton-White and Martin Salter of the Angling Trust. They pressed for an increase from last year’s 15 boats to enable more skippers to gain the skills required to operate a world class catch and release big game fishery. The minister was also presented with a paper outlining how the CHART programme should evolve into a expanded, licensed live release fishery generating both conservation and economic benefits.

The key points in the angling presentation included:

“We were pleased to have had the opportunity to discuss with the Minister our joint proposal for a small scale, sustainable, licensed recreational fishery supported by those skippers who have ‘graduated’ through the 2021 CHART programme. These are skilled, professional small business operators who have spent up to £20,000 equipping their boats to deliver safe, live release recreational fishing.

“These skippers know how to tag and release the fish and in our view should now be the first tranche to be licensed to set the standard in an exciting new world class recreational bluefin tuna fishery. We are pleased that the CHART programme has been confirmed for this year and that a ‘scoping project’ and consultations and will follow on the main prize of a properly licensed, live release fishery serving both conservation and economic objectives.”

“Last year’s CHART programme exceed all expectations with record numbers of fish caught (700+), tagged and safely released. Studies indicate that the financial benefit to the coastal communities in the South West ran to several hundred thousand pounds providing an extended recreational fishing season and a welcome boost for local economies.

“I was pleased that the minister recognised these achievements and shared our enthusiasm to make the most of this exciting opportunity. Whilst it is great that CHART will operate again this year we are keen to expand the number of participating boats and want to see our vision of a licensed live release, bluefin tuna fishery realised as soon as possible. The forthcoming consultation and ‘scoping project’ will be an important step on this road.”

“I am delighted to announce the continuation of the CHART Project in 2022 to support the collection of scientific data on Atlantic bluefin tuna. I also welcome the proposal from the Angling Trust and Bluefin Tuna UK on their ambitions for a future recreational bluefin tuna fishery, which we will consider carefully.” 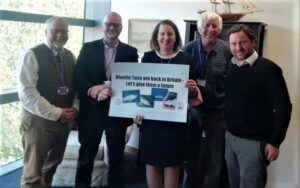