After an extensive recruitment process the Angling Trust is pleased to announce that the next chair will be Sir Charles Walker MP who will take over from George Stephenson when he completes his nine-year term in September 2022. Sir Charles (54) announced his intention to retire from the House of Commons at the next election.

The news of his appointment has been greeted with enthusiasm both in Westminster and amongst the wider angling community.

Former Angling Trust ambassador and Environment Minister Lord Richard Benyon described it as “an inspired appointment” and the Fisheries Minister Victoria Prentis described Charles as “a trusted and valued colleague” and said she was “thrilled at the news and is looking forward to working with him as he harnesses his lifelong passion for angling and all who fish.” 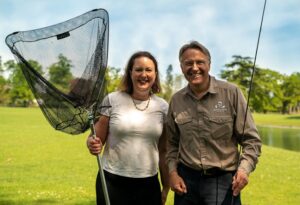 “What a fabulous decision by the Trust to appoint Sir Charles Walker as chair. I have fished with Charles and know how passionate he is about the sport as well as being a very capable angler. His electoral majority — in a constituency with the River Lea as its core — shows how highly he is regarded by his constituents.”

Charles has been fishing from an early age and enjoys all forms of angling. He has caught large pike in Norfolk, barbel from the Wye and Kennet, salmon in Scotland and trout, carp, tench, roach, chub, perch and grayling from many venues. He also enjoys sea fishing and has landed pollock, bass and tope.

Charles entered Parliament in 2005 as the Conservative MP for Broxbourne and chairs the All Party Parliamentary Groups on Angling and Chalkstreams as well as a number of influential select committees.

“The appointment of Charles Walker is fantastic news both for the Angling Trust and the sport as a whole. Fishing is his passion and he will bring his energy and infectious enthusiasm to the role as well as a detailed knowledge of how to influence government on the issues that matter to our sport. Charles has a big set of boots to fill as George Stephenson has been a superb chair and we are indebted to him for his work and commitment. He leaves the Angling Trust in a strong place.” 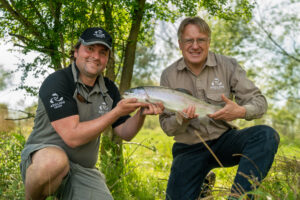 “I couldn’t be more pleased to see Charles stepping into this role. His political contacts are legendary as are his powers of persuasion. With our focus on increasing and broadening participation Charles’ record in championing mental health and wellbeing issues aligns ideally with our goals.  He is going to be a fabulous advocate for angling and I’m very much looking forward to working with him again.”

“It is an extraordinary honour for me to have been offered this role. Throughout my time in Parliament I have been impressed by the energy and professionalism of the Angling Trust and the way they constantly advocate for our sport. It really is a huge privilege to have the opportunity to put something back into fishing which has been a lifelong passion for me. I can’t wait to get started and I’m really looking forward to meeting the membership and getting to know everybody who works so hard to create the fishing opportunities we all enjoy.”