A record-breaking line up of 48 anglers battled it out for both team and individual honours in the 2022 Ladies National Championship earlier this month.

Staged at the prolific Tunnel Barn Farm complex, Warwickshire, taking part were a host of England internationals, venue regulars, and first timers in an event fished on one of the hottest days of the year so far.

Winning the day and booking herself into the Fish O Mania Final as the Ladies National Champion, was 21-year-old Sarah Taylor who drew Tunnel’s Canal Lake peg 13.

Although not a noted area, the peg proved to be far from unlucky as she plundered 65k 600g of F1s and bonus carp on pole with pellets and casters.

Starting by fishing pole and pellet to the reeds in front of her, Sarah had a decent run of F1s plus a 6lb carp in the first hour then spent the rest of the match working through her lines to fish a mixture of casters shallow, maggots short, and down the edge to keep the fish coming. 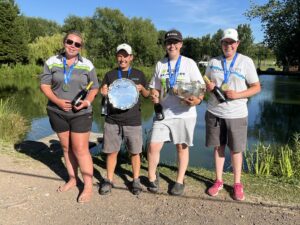 Sarah’s last 30mins proved to be a bumper time and banded caster fished shallow across to the reeds saw her bag around 15kg of F1s to seal the victory.

Runner up, Samantha Sim, also had a busy day over on Jenny’s peg 8 where she took 54k 950g of carp on caster fished across while third placed Shannon Swallow alternated between fishing down the track and across for her 41kg weight from Jenny’s peg 19. 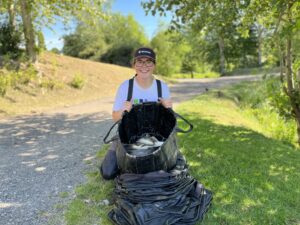 Team honours went to Aquaholics – a side made up of Sarah Taylor, Kayleigh Dowd, Charlotte Gore, and Leanne Knott – who piled 121k 350g on to the scales to put them well clear of Starlets AS on 109k 650g.