All 36 of the qualifying finalists faced tough conditions as temperatures soared into the thirties and the venue’s big carp proved cagey to catch during the weekend event.

But Boddington isn’t the place for finesse tactics and anglers switched between pellet waggler, bomb and pellet, and Hybrid feeders to tempt the resident mirrors and commons from the dam wall, right bank, and Sailing Club sections. 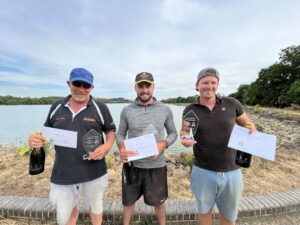 It was the pellet waggler, fished at 25m range, which delivered the goods for Brandon on Day 1 as he put together what was to become an unassailable lead with a match-winning 101k 850g of carp from Dam wall peg 2.

Day 2 saw him draw 101, a peg away from the main catching areas in the 80s and 90s, and he opted to fish a Hybrid feeder at long range in a bid to bolster his weight and stay in front of the chasing pack from Day 1.

That pack was led by Andrew Ashington who took an opening day 57kg from Dam wall 4, Stuart Palser’s 49kg from peg 3 on the Sailing Club, and Jason Mackey and Alex Walker who weren’t far behind on 43kg and 41kg respectively after the first match. 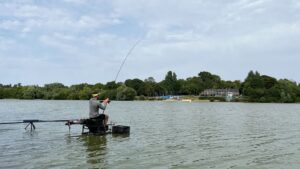 Day 2 was even hotter on the reservoir and anglers on the right-hand bank and Dam wall areas slugged it out for the top weights as both areas reached peak action in the heat of the day.

It was Jason Mackey, drawn on peg 89, who piled over 64kg onto the scales to take first on the day and put himself in contention of a podium place.

However, Brandon was able to muster an incredible 27k 400g from his unfancied swim, including six fish in the final hour, to deliver overall victory courtesy of a 129k 250g total weekend weight.

It was the pellet waggler which did the damage for Jason Mackey on Day 2 and his carp haul helped secure the runner-up position overall with 107k 800g, just ahead of Alex Walker in third place with 99k 300g. 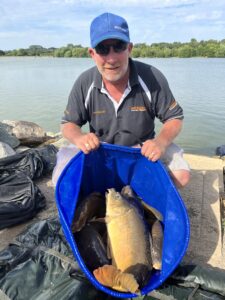