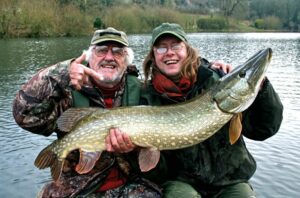 Bernard Cribbins, who has died aged 93 after a career as a much-loved character actor spanning more than 75 years, was a great ambassador for angling who will be sorely missed.

Known to generations of children, Bernard narrated the children’s TV programme The Wombles, starred in Doctor Who as Wilfred Mott, the grandad of Catherine Tate’s character Donna, played the station porter Albert Perks in the 1970 film The Railway Children and holds the record as the reader of the most stories on Jackanory with 114.

Many in the angling world will remember Bernard as the voice of ‘Passion for Angling’ in which he described the adventures of Chris Yates and Bob James, and for his contributions in the ‘Catching the Impossible’ series with Martin Bowler, which featured some of the best angling films ever produced.

“When creating our ‘Passion for Angling’ series for the BBC, it was a no brainer to choose Bernard to describe the adventures of Chris Yates and Bob James and it was his dulcet tones that contributed so much to the success of the series.

“Following that up with Martin Bowler’s ‘Catching the Impossible’, I wanted Bernard to be Martin’s angling companion and because he is such a good angler, he never failed us when required to catch a particular fish.

“We all became great friends and would have included Bernard in every ‘impossible’ challenge but he was very busy at the time, chasing David Tennant’s Dr Who round the film sets at night. Even worse, he was suffering from cancer and had to put up with chemo every week. How he managed to successfully battle big carp and 20lb pike after all those challenges was remarkable.

“Bernard has been described as a creative genius and none of us could ever doubt that. His extraordinary variety of talents means he will be missed by us all and having had the privilege of sharing a tiny portion of his life, his passing brings a tear to my eyes.

“Rest in peace Bernard and catch another one for me please.”

Martin Salter, Angling Trust’s Head of Policy, said that Bernard “really was the voice of angling”.

“His superb narration of the Hugh Miles masterpiece ‘Passion for Angling’ and his wonderful contribution to Martin Bowler’s ‘Catching the Impossible’ encapsulated the beauty and magic of fishing like no one else ever could. I met him a couple of times and was struck by his wit, wisdom and unfailing good humour. He will be sorely missed. “

Keith Arthur, Angling Trust Ambassador, writer, broadcaster and presenter, wrote in his tribute: “Rest in peace the great Bernard Cribbins. I had the honour, privilege and pleasure of working with him a few times and was also invited to a ‘special’ 88th Birthday Party for him at Dever Springs, where he was joined and celebrated by Eric Clapton, Chris Tarrant and the recently and sadly departed Gary Brooker of Procul Harum fame.
“Bernard was modest, humble and incredibly funny as well as being a fine fly angler. I think it’s fair to say we’ve lost a genuine one-off. Goodbye old mate.”

Image: Bernard Cribbins with Martin Bowler and a 22lb pike