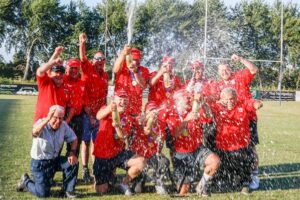 The team of six’s 44-point total was just too good for Derbyshire Angling Federation in second place on 48, with Drennan Barnsley Blacks completing the medal positions after a weight countback separated them from a 60-point tie with Starlets AS.

There were mixed fortunes across the sections with weights of barbel topping 20 kilos claiming top places while other anglers faced a more traditional match targeting silverfish. It was the silvers approach which scored for the Ringer Baits side.

“We practiced hard for this event and knew we couldn’t rely on barbel, so our team plan was simple – get your heads down, fish for the small fish, and catch consistently through the day,” revealed Phil.

“Everyone has us down as a commercial team so a win like this is even more special.”

The team will now represent the England at the World Feeder Champs for Clubs in Ireland in 2023, and they’re already relishing the prospect.

“Every angler in the squad has a great record in Ireland from World Championship wins with England to festival wins so we’d have to really fancy our chances. We’ll certainly be putting in the graft that’s for sure.”

Derbyshire Angling Federation will have to wait until early in the new year to find out if they will be joining Ringer Baits in Ireland, with the extra spot potential awarded thanks to the nation’s current high ranking in international feeder events.

However, they were able to celebrate on the day courtesy of providing the top two anglers.

It was a swim he’d drawn back in October so knew the peg well and set about it with a mixture of blockend and groundbait feeders with maggots, casters, and small pieces of worm on the hook.

Starting two thirds of the way across, the local angler caught steadily through the day and with 45 mins to go went out longer to boost his catch with three decent chub and a barbel.

Team-mate Johnathan Trivett’s 20k 750g haul of nine barbel came from peg 29 on the stunning Fiskerton section where he found his swim get stronger in the last couple of hours and he finished with a flurry of barbel just seconds before the final whistle.

* The Angling Trust would like to extend our gratitude to all the stewards and anglers who helped make the day possible, and special thanks goes to Newark & District and Nottingham Piscatorials clubs for the use of their waters.