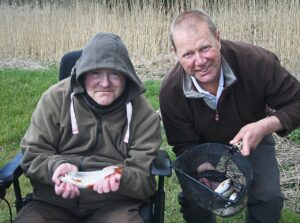 Adam ‘Budgie’ Price was, without question, one of the most inspirational characters in angling. Co-founder and driving force behind the award winning, pioneering Avon Roach Project and all-round great bloke, what Budgie achieved is widely regarded as being simply on another level and more than most could dare to dream, and highly acclaimed whether you are a roach angler or not. Despite being confined to a wheelchair (quadriplegic) following a road traffic accident at the age of 27, he simply found a way and refused to accept his significant limitations. Sadly, he passed away on 22nd August 2022 following a 10 day stay in intensive care in Salisbury Hospital. Below is a tribute made at his funeral by his close friend, fellow Angling Trust Ambassador and other half of the Avon Roach Project, Trevor Harrop.

It’s a huge honour to be asked to say a few words here today. First thing I thought was I wonder what Budgie would like me to say. and then I heard his voice in my head, ‘Mate – try not to trip over anything and don’t just bang on about the Roach Project. But, do try and flog ’em all a book, if you can keep their attention long enough – if you can’t, then just pretend to get all choked up and make a run for it…’

Budgie had an infectious charm, as we all know, and fully earned the right to his uniquely irreverent, sometimes tangled, outlook. And while there’s enough stories for another book, I’d like to share just a few of our typical Budgie adventures, illustrating his unique character, if I may, when the grown-ups weren’t looking.

Unquestionably, the most outstanding is, of course, the astonishing success of the award-winning and ground-breaking Avon Roach Project, which was a huge part of our lives for over 15 years. The sheer scale and lunacy of the original concept lent itself to being dismissed before it had even started. But Budgie doesn’t do dismissed, clear from the moment he was told, following his accident, to accept his limitations, which roughly translated in Budgie’s head as ‘tell him it can’t be done and he’ll show you just how it can…’

I was for the main part ‘voice activated’ which was OK but did come with its drawbacks, particularly as Budgie had an infuriating way of instructing me, which would later actually become profoundly soul-stirring. He would literally operate me and it was infuriating, until I realised he was actually doing it all himself but with my hands, evident from every push on a saw or hit of a hammer being matched with movement of his own hands. Once I realised, it was quite overwhelming, and I never argued again.

Seeing Budgie as just sitting and watching was so far from reality, and in the case of the Avon Roach Project, it has been hard to get people to see beyond the lies their eyes were telling them and was always something Budgie was far better at dealing with than me. I stand by what I have always said, The Avon Roach Project would far more likely have succeeded without me than Budgie.

He was acutely aware of the passing of possibly limited time so was always keen to get on and conquer which, of course, he did, but with an endearing mischievous humility – often, I’m lucky to say, with me.

Somebody summed him up perfectly recently, by describing him as always having a twinkle in his eye – which is so, so true, as well as an extraordinary determination, there was devilment in him. Which I was often on the receiving end of…

This was evident one day when we were fishing and discussing the construction of filter vessels for our roach tanks. On the way home, he got me to drive slowly through a village where he revealed his thoughts.

‘Them’s what we need’ pointing to people’s glass recycling boxes. ‘We need to nick about a dozen and fix pipes and pumps. They’ll be perfect for what we want.’ I said I wasn’t really comfortable with pinching stuff and besides they have Downton Council printed all over them. He said ‘we can just sand that off. And nobody will think to look for them in Ringwood, especially in your back garden. And, I have thought about it, even if we do get caught, nobody will think it’s the idea of the bloke in the wheelchair, so it’s you that’ll get carted off to be raped and buggered in jail; which, is a small price I think I’m prepared to pay…’ He was, of course, joking and just giving me an idea of what he’d already built in his head.

In the real world, wheelchair protocol was handled according to circumstances and usually with tolerance and humour and I only ever once saw Budgie react angrily. It was in a hospital where tensions were high anyway as he had been blue-lighted there five days before one of our annual fundraiser do’s – which he did make in the end, by the way.

It happened when a health care assistant asked me, we assume because she’d seen the wheelchair beside the bed, ‘Would your friend like a cup of tea or coffee?’ I gestured with eyes and a nod towards Budgie to suggest she should be asking him, then, undoubtedly because of the heightened tension, a spark hit Budgie’s powder keg and he went off. ‘Excuse me, I might be disabled but I’m not bloody stupid. I’m right here, and if you want to know if I want a drink, then bloody well ask me. I’m perfectly capable of talking for myself. And no, I don’t want a drink thank you very much.’

She looked at me and smiled and said ‘I’m really sorry but I’m deaf and have to lip-read and because your friend is laying down, I can’t see his mouth clearly enough to see what he said. He can have a cold drink if he’d rather…’ I smiled back and said ‘he says he’s fine, but said thank you very much for asking…’

Last one, and it’s my take on his legs and another example of normal in Budgie land.

To anyone else, double leg amputation would be monumental; to Budgie it was an inconvenience with a positive payoff, he said, if he didn’t die from the anaesthetic.

So, on the day of the op, not expecting to hear for a week, I paced and worried and thought of nothing else – then, while trying to anaesthetise myself with lager, at 9.30pm, the phone rang. It was a cheery Budgie saying ‘Hello mate. Just letting you know it’s all done. Legs off and sorted and I’m now three stone lighter.’ And to the question ‘how you feeling?’ he answered ‘Erm, fuckin’ starving as it goes – Oh, and I might be home Friday, so why not come over for coffee on Saturday and I’ll show you me stumps?’

Now, I can be a bit sensitive when it comes to Budg, so after sobbing my heart out for the first ten minutes of seeing him he said, ‘Right, I’m having prosthetics, which means I’ll be able to wear shoes, which’ll please Rose. Already know the shoes I’m having. Georgie’s getting me a pair for Christmas, and I might even be able to have roach printed on the sides of them, which won’t please Rose. And, what I reckon is size 9’s. I don’t want big flippers like yours, I want dark hairy ones like an Italian footballer, and with gaps between the big toe and the others so I can wear flip-flops in the summer. What do you reckon?’

I couldn’t believe I’d just sobbed my heart out. What a legend and typical of how Budgie dealt with the world.

I’d like to finish, if I may, with a few personal thoughts. This could get messy.

Budgie battled more adversity than any ordinary human could stand in a lifetime but just got on and conquered. He always found a way and was astonishingly creative, testament to which is the Avon Roach Project. Nobody who met or knew him could fail to be enriched by the experience. He was truly inspirational, a force of nature – as well as being a right pain in the arse sometimes.

We had our moments, like all close friends, but Budgie was simply the greatest person I have ever had the privilege to know; made even more special by being able to call him my best mate. We shared a connection few will experience, an empathy beyond words.

I loved him. He was my hero, and I told him so, even again in his last hours. Some of the most poignant and moving moments of my entire existence, which I will cherish forever.

So, I end with the words I started with – Budgie Price, Absolute Legend. I promise to continue what we started,  and I promise I won’t let you down. May peace be with you now my friend. The bestest best mate in the whole wide world, my soulmate and superhero. Loved and remembered today, every day, and for always.

And I know I speak for us all when I say… Budgie Price, I am so glad you happened to me. 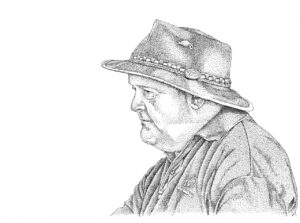