Sixty-four anglers were competing for 28 places which will make up two teams of 14 that will compete against Scotland, Wales and Ireland in the spring and autumn of 2023.

The qualification process for the final began in April this year with regional heats at many of the large stillwater trout fisheries across England. A total of 227 entries were made with all competing for a place in the final at Draycote Water.

Top rod and National Champion for the second time was South West angler Mark Miles. He will gain his eighth cap next year – a magnificent achievement.

The fishing at Draycote Water was challenging with a two-day rod average of just four fish. Conditions on both days were good with light winds and sunshine/cloud cover but the surface water temperature remained high after the hot summer and the trout remained reluctant to feed for long periods. Many anglers reported ‘taps’ and ‘light pulls’ or fish hooked and lost within a few seconds.

Methods varied but most fish fell to flies fished in the top 2 or 3 feet, many taking small lures or nymphs fished slowly. Dry flies also accounted for some trout.

Mark’s success came by fishing a 12ft fast tip with a size 12 Cut Throat Cat Booby with 3mm eyes on the point fly then, on the two middle droppers, a red holographic Diawl Bach and a Claret Hopper.  An Orange Foam Daddy was on the top dropper. Retrieve was a fast figure of eight. In practice he found a lot of fish between M and N buoys. Mark started there on Day 1 and steadily caught all day but Day 2 was “like fishing a different lake”, the fish stopped feeding and it was a grind! Mark managed four fish but was lucky to land three decent sized fish which helped him maintain his first place finish.

TEFF would like to thank Fishery Management Ltd for their support and administration of this event.

If you are interested in representing England at future internationals then please visit the Team England website for details of how to enter. 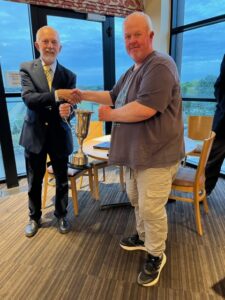