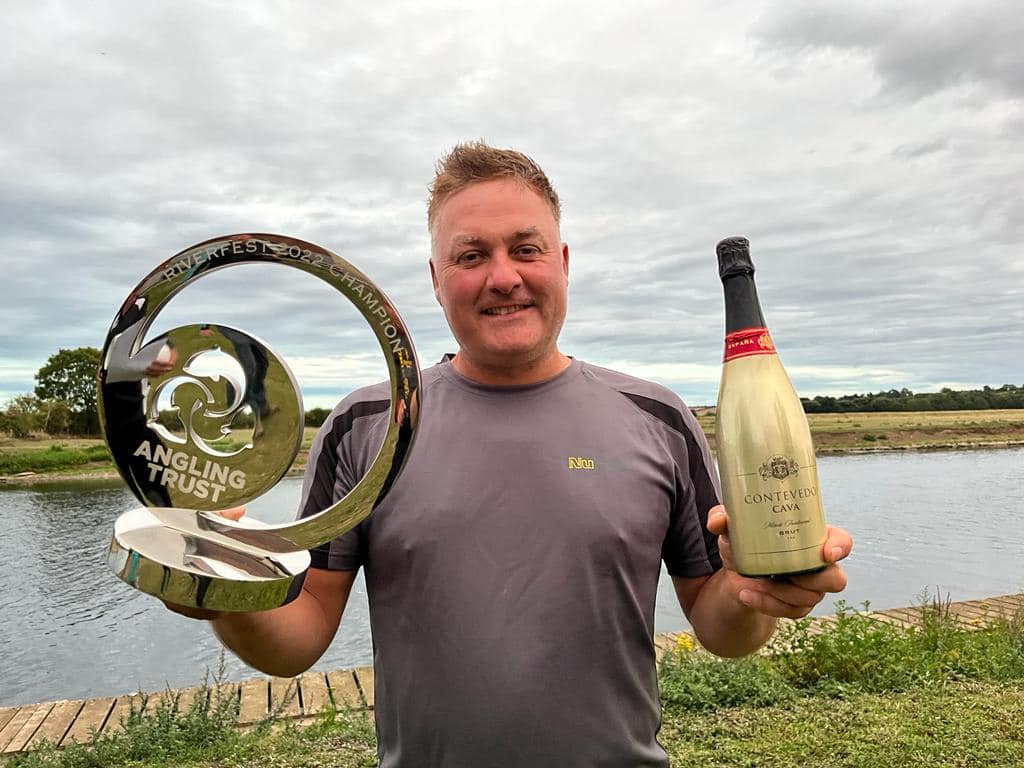 River expert Lee Edwards is the 2022 Angling Trust RiverFest champion in a two-day event won with barbel but supported by superb silverfish catches.

Lee, from Caerphilly, South Wales, added the title and £14,000 paycheck to an incredible list of running water honours which include river records and championship victories.

The Wales international, who got through from to the final from the Warwickshire Avon qualifier in July, drew the famous barbel peg on the Nelson’s Field stretch on the first day and made the most of it with a superb display of feederfishing to take 14 barbel and three chub for an 88lb 13oz total.

Lee used a blockend feeder with hemp and caster and fed double pouches of hemp over the top, picking off fish steadily through the day with caster the best hookbait.

A draw at the top end of the Ferry Field on day two saw him focus on silvers on both pole and feeder to boost his overall weight and his target of 11lb 1oz – which would take him to a 100lb total – was surpassed thanks to a net of dace and perch plus a bonus 2lb barbel and a rogue grayling taking him to 14lb 15oz and a 103lb 12oz finish.

“This was the one I’ve wanted to win for ages,” admitted Lee, who had the honour of winning the 10th RiverFest final staged. “I knew the first day catch would put me in a good place, but you never know so it was a nervy second day for me. I really struggled in the middle of the match but caught dace well on the groundbait feeder in the last hour and the barbel was a handy bonus.”

Overnight temperatures were distinctly autumnal and coupled with low levels and flow it proved a tricky weekend for the 78 competitors although the leading weights were high and there were some fine back up catches of silverfish to over 20lb each day.

It was a big weight of bream which claimed the runner-up spot on day one and pushed the captor, Toby Bunting, to second overall after the two matches.

His day one haul was made up of 13 bream all taken on groundbait feeder cast three-quarters of the way across the river with either worm or corn on the hook.

The bulk of Toby’s catch, 11 fish, came during a feeding spell in the first two hours with two further fish boosting his catch late on.

Day two saw Paul Passmore take 45lb 1oz of chub on the feeder from his peg in the Ferry Field, a catch that turned out to be the best across the board on the day.

Fourth was filled by Chris Hallows, who headed to the famed barbel swim at Nelson’s Field, although it proved a tougher nut to crack on the second day, with eight fish falling to his feeder tactics for a 43lb 14oz finish. That was enough to propel Chris to 4th place overall with 54lb 13oz in total.

England international Cam Hughes showed his quality once again with an amazing 25lb 2oz of pole-caught roach from the Rack section on day two to add to his 28lb 14oz from day one, securing him fifth spot overall, just ahead of his England teammate Sean Ashby on 47lb 3oz.