Senior members of the Angling Trust campaigns team have been speaking to delegates and ministers at the two main party conferences to warn of the dangers to fish and fishing from plans to water down what few protections our rivers and waterbodies currently have in the face of mounting problems from both sewage and agricultural pollution.

As part of their ‘dash for growth’ the new government under Liz Truss has decided to abandon its previous pledges to protect the environment and announced plans for ‘a bonfire of regulations’ which will make life easier for developers to destroy precious habitats and potentially increase the pollution of rivers from agriculture.

This has led to a public outcry from a wide range of organisations concerned with protecting wildlife and the natural environment including the RSPB, Rivers Trust, National Trust, Wildlife Trusts, Friends of the Earth, Wildfish and many more.

The Prime Minister has already received a letter signed by 78 organisations, including the Angling Trust, warning of the environmental, social and economic damage that could be caused by her deregulation plans.

The letter highlights the threats to the environment from the Retained EU Law (Revocation and Reform) Bill, the Planning and Infrastructure Bill and the proposed abolition of the recently agreed Environmental Land Management Scheme (ELMS) under which farmers are paid, not according to how much land they own, but for improving agricultural and land management practices to reduce harm to rivers and wildlife.

The Planning Bill proposals are designed to weaken environmental  rules in “Investment Zones” around the country leading, amongst other things, to more nitrate and phosphate pollution of rivers and streams of the type that has caused a crisis on the upper River Wye from the proliferation of chicken farms.

The recently introduced requirement to ensure that developments around the Wye, the Hampshire, Wiltshire and Dorset chalk steams, the Norfolk Broads, the Lake District, Poole Harbour and the Solent to protect them from nutrient overload, known at ‘nutrient neutrality’, could also be swept away.

The previous Environment Secretary, Michael Gove, has already spoken out against the government’s plans. Back in 2017 Mr Gove acknowledged the importance of EU protections such as the Urban Waste Water Directive which drove huge improvements to sewage treatment works. He said:

“The European Union has, in a number of ways, been a force for good environmentally. Our beaches are cleaner, habitats are better protected and pesticides more effectively regulated as a consequence of agreements that we reached since we entered the EU. And I have no intention of weakening the environmental protections that we have put in place while in the European Union.”

Speaking at the Labour Party conference in Liverpool alongside Shadow Environment Minister Daniel Zeichner, Angling Trust Head of Campaigns Stuart Singleton-White spoke about the devastating impact pollution is having on our rivers, pointing to the 760,000 spills from Combined Storm Overflows in the past two years.

“There have been some bold promises from the government in recent years and signs of modest progress through measures like their Storm Overflow Reduction Plan, the commitments in the Environment Bill on water quality, and the moves to make water companies more accountable for the damage they are causing. These were all moves in the right direction but now it seems that any small progress made is about to be slammed into reverse. We need the official Opposition to step up to the plate and start working effectively with all concerned MPs to prevent some of the dreadful damage that will occur should these plans ever become law.”

At the Rural Reception at the Conservative Conference in Birmingham, organised jointly with the British Association for Shooting and Conservation, Angling Trust Policy Chief Martin Salter shared a platform with the new Environment Secretary Ranil Jayawardena who is responsible for introducing the deregulation agenda that has prompted such an outcry.

“The angling community would be alarmed if the new Retained EU Law (Revocation and Reform) Bill sought to reverse what limited protections our waterbodies currently have. No one is saying that the regulatory framework inherited from the EU can’t be improved but you have already seen the concern expressed by our colleagues in RSPB, the National Trust and other groups at the prospect of weaker protection. By all means let’s update and improve protection for our rivers, our countryside and our precious wildlife they contain but let’s not leave them defenceless from the ravages of the bulldozers and polluters.”

Friends of the Earth 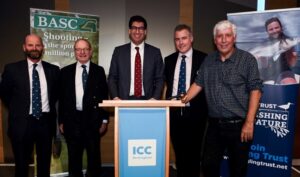 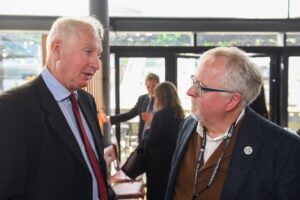