The Angling Trust Preston Innovations England Feeder team has won the silver medal in one of the toughest World Feeder Champs ever staged.

Finishing with 73 points overall, they were an agonizing two points behind the winners, with Serbia taking gold on 71 points. Much fancied Hungary took the bronze with 74.5.

Hosted on a 600 acres lake near Kinrooi in the east of Belgium, the England lads faced one of their biggest-ever challenges as fish failed to show in numbers leaving some sections a bream or bust affair and others a scratching race.

The tough conditions were due to low water conditions on the connecting River Maas not delivering their anticipated autumn shoals of silverfish into the working sand and gravel pit venue. The fishery was selected late – and the event staged later than normal in the year – after being switched from the Ukraine.

England were lying in sixth place after day one but put in an incredible day two performance to claw back positions on the patchy venue.

“I’ve known my anglers a long time and I’ve never seen them fish so hard,” admitted manager Dean Barlow. “But we have belief and even though it has been a rollercoaster ride they’ve plugged away and have done brilliantly from terrible draws. 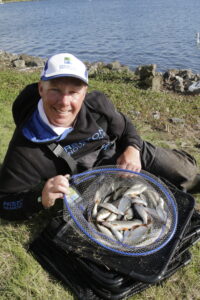 “We were eight points behind one of the most technical teams in the world in Hungary and we’ve ended up beating them to the silver medal so I’m a bit chuffed to say the least.”

Day 1 saw the England lads pull an amazing result out of the bag after being handed a terrible series of pegs. Rob Wootton took on peg 23 on the tricky A section and finished with a 4k 990g of roach with a few better fish

Just a few yards away, on B4, team captain Mick Vials worked his peg for a fourth-place score with 5k 830g – England’s biggest weight on the day. A tactical switch to a big feeder with worm in the closing stages of the match saw him tempt a huge bream and a roach in quick succession.

Lee Kerry’s draw in C section once again put England away from the better areas but he plugged away for the five-hour match to bring back 4k 170g for eighth in section. The reason behind a slow last 90 minutes became apparent after he hooked a huge zander with just five minutes to go – a fish which had hampered his catch rate yet didn’t count in the match.

It was the late pegs in D section and the entirety of E which everyone knew would be a death draw and damage limitation was the name of the game for those heading to those areas. The first part of D section held bream pegs but as you got past halfway you were scratching for bites and grams.

But if there are two anglers you want in the toughest positions then Steve Ringer and Adam Wakelin would be at the top of your list. And their class shone through, Adam finishing fourth in section with 2k 200g – only beaten by Ireland’s Michael Buchwalder and two anglers who managed to land a bonus specimen perch and roach each. 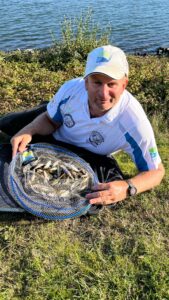 Steve however was on one of the worst pegs on the entire lake and had to watch anglers either side of him catch tiny bulheads, asp, and perch in the first few minutes. But the 2014 World Champ kept his cool and sought out the bigger roach, netting three after 20 minutes, and then kept plugging away at shorter range than his rivals to pick off runs of redfins for a 14th place finish from a peg most predicted would only be good enough for 20th.

Day 1 saw England in sixth overall, just 11 points off first place which was held by Serbia, a team who set out to fish close in and catch tiny fish at speed for the full five hours.

Better pegs were hoped for on day two but again the draw bag delivered some tough challenges as Adam Wakelin headed to Rob’s peg from day one and Mick only four away from the area he endured the first day.

Steve again suffered with another poor location for day two, the end peg in the dire E section only rated for a few grams. After 20 minutes he abandoned his tactics for roach at long range and fished just metres for the bank with single bloodworm to bring back 182 tiny perch and bullheads for 1k 690g and a remarkable sixth in section.

There was some hope within the draws for Lee and Rob’s pegs as they headed to an area where bream had been caught on day one, although a harsh overnight frost left many wondering if they would feed again.

They did, albeit in fewer numbers, and both Lee and Rob worked their pegs hard. Lee ending the day in 8th in section with two bream, two skimmers and roach for 5k 300g while Rob claimed a second with an all-roach net of 7k 860g.

At the other end of the lake, Mick Vials returned a solid 2k 600g from B section for 10 points while Adam’s 1k 910g saw him finish 7th in A section.

England’s 33-point score was the second best on the day, behind Ireland on 29.5, and saw them leap four places in the final reckoning, a result the manager was obviously delighted with.

“I’m so pleased for the lads that we’ve pulled it out of the bag,” admitted Dean. “I’ve never seen Steven fish so well from two of the worst pegs on the lake while Lee Kerry had nothing at all at the halfway stage and has come up trumps with two bream for mega points. Rob was second in his section and only beaten by a bream weight while Mick and Adam delivered the solid performances they’re famous for. It’s been incredible!” 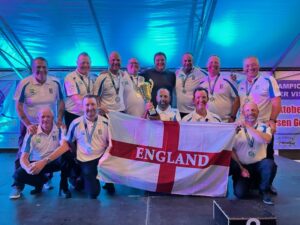