Alex Sobel MP, Labour’s Shadow Minister for Nature, Water and Flooding, joined the Angling Trust and the Ross on Wye Angling Club on a visit to the River Wye to see how the ongoing pollution problems are killing the river.

Alex’s visit (28th October) coincided with a period of heavy rain, causing yet more problems for the river.  Only three days prior to the visit the Ross Angling Club had recorded phosphate levels 13.8 times above the legal limit.

The visit from Alex Sobel coincided with the announcement from Thérèse Coffey, Defra Secretary of State, that the government would miss its legal duty under the Environment Act to publish water quality targets for England.

“Seeing first hand the serious water quality issues in the Wye, and hearing from anglers that salmon are now almost extinct was heart-breaking. I want to thank the thousands of volunteers who dedicate their precious time to carry out testing work with the Trust. “The next Labour Government will demand mandatory monitoring of all sewage outlets, introduce automatic fines for discharges, and a standing charge penalty for companies failing to meet monitoring requirements. We will hold water bosses personally accountable for pollution and strike off persistent offenders. “There is no time to waste – we need to clean up our rivers as quickly as possible, and only a Labour government has the political will to make it happen.”

While visiting the River Wye, Alex took part in the Angling Trust’s Water Quality Monitoring Network by testing the river for himself for both phosphate and nitrate levels.  While the level of phosphate pollution had fallen since the alarming levels of three days previous, it was still above the legal limit for the river.

“It was hugely important to be able to bring Alex, as the Shadow Environment Minster, to the river and to be able to show him the problems this iconic rivers is suffering.  The Wye is on its knees, and it is not just the fish and wildlife that is suffering.  The whole economy of the area, whose tourism relies on this beautiful river that was once teeming with life for its livelihood, could be wiped out if urgent action isn’t taken.

“By showing Alex the problems, we are looking for Labour to ensure its policies and priorities address the pollution crisis all our rivers are facing.”

While in Ross-on-Wye Alex was briefed by both the angling club and Fish Legal on the issues the river is facing and the actions they are taking to protect their fisheries by restoring the river to good health.

Robert Leather, Chairman of Ross on Wye Angling Club, who joined Alex on the river, said:

“We have been witness to a rapid decline in the ecosystems in the Wye caused primarily by some poor unregulated farming practices. Ross Angling Club were able to explain to Mr Sobel the change from what was a crystal-clear river, to one filled with sludge covering the once ecologically rich river beds.

“Our two and a half year phosphate monitoring programme demonstrates clearly the link between phosphate rich run-off and the high levels of algae now in the river. Mr Sobel will take these findings to his Labour colleagues and hopes to attract support for his political party through prioritising restoration of our river-based ecosystems through encouragement, enforcement and a ‘net zero’ cost to the tax payer by funnelling fines back into the environment.”

Penny Gane, from Fish Legal, which is representing the Ross on Wye Angling Club in an ongoing legal action against Natural Resources Wales, said:

“It is now over two years since we notified Natural Resources Wales that environmental damage is being caused to the River Wye by intensive poultry units in Wales.  Having initially concluded that there was no evidence of environmental damage and therefore no duty on them to act, we are awaiting Natural Resources Wales response to our questions about their reliance on out-of-date data to reach that conclusion.”

The River Wye has become the totem for all that is wrong with our rivers and the system of agricultural land management, which allows alarming amounts of run off from a range of sources including the expansion of industrial-sized poultry units throughout Herefordshire and in the upper Wye catchment in Powys as well as poor sewage management, to flow unchallenged into rivers.  The Wye is the pinnacle of the government’s, its agencies, and water companies’ failure.  All English and Welsh rivers fail chemical standards set by the government, and only 14% meet ecological standards in England. 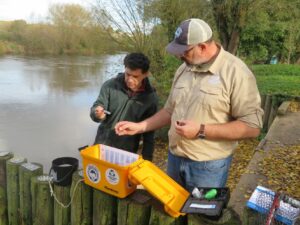