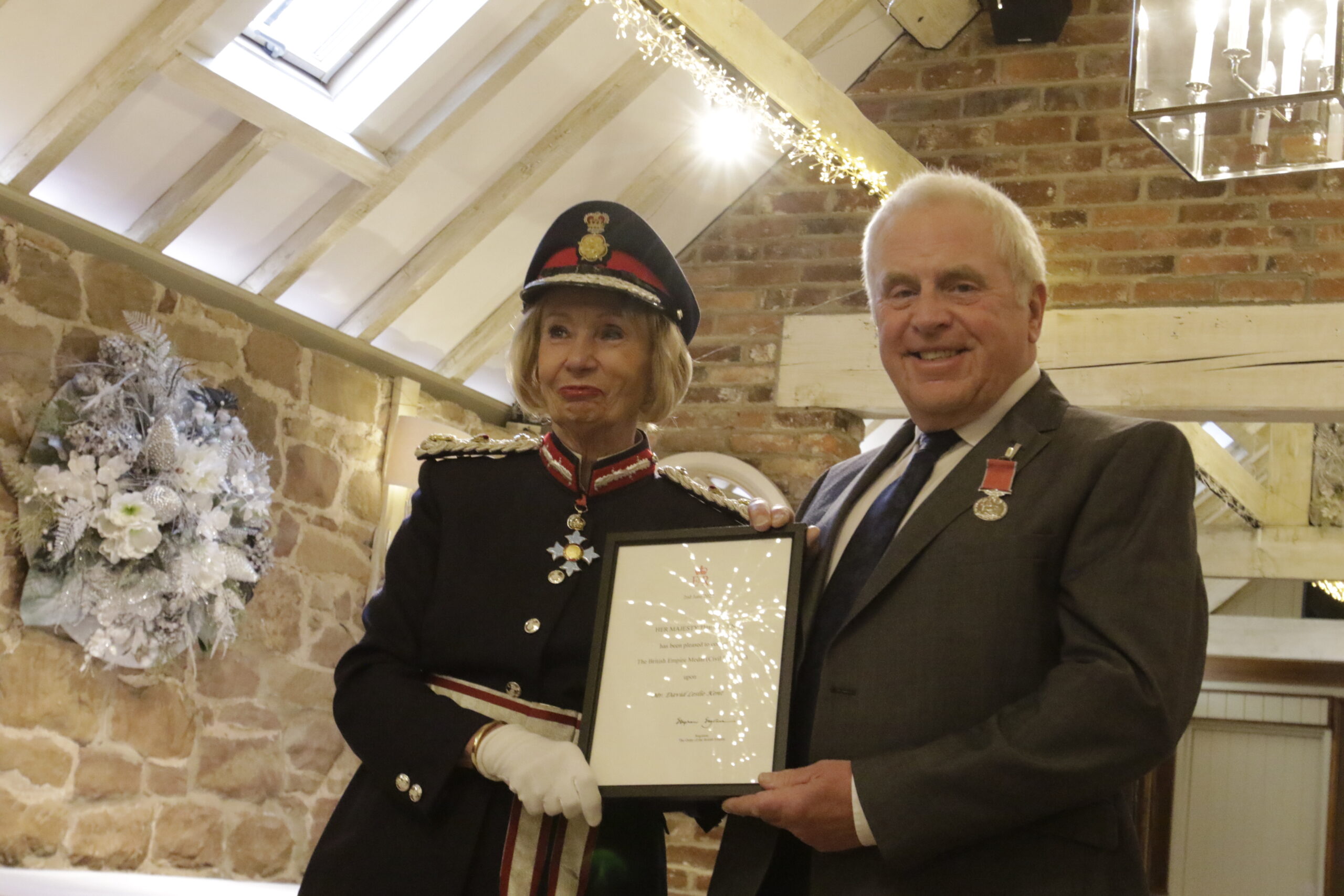 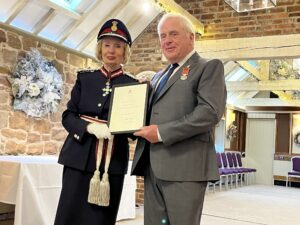 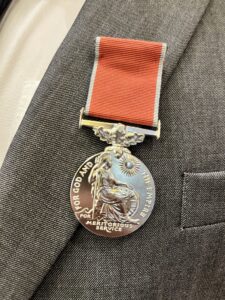 Angling Trust stalwart David Kent has this week received a British Empire Medal for his services to angling following a lifetime of dedication to our sport.

The honour, presented to David by His Majesty’s Lord-Lieutenant of Derbyshire Mrs Elizabeth Fothergill CBE, was conferred to him by Her Majesty the Queen in June.

David was joined at the ceremony by his family and close friends and supported by local dignitaries, many of whom chatted to him about their own fishing experiences.

“It means a lot, obviously, I’m humbled by it for sure, and it just shows that your activities and service to the sport and angling world are acknowledged,” he said. “My wife, Ann, is very proud.

“I’m very grateful for all those who put together an initial nomination but all those people who submitted letters of support from all over the angling fraternity.

“More than anything though I’m really pleased as it’s very rare that angling gets such an award. Some of our World Champions and England manager Dick Clegg of course have quite rightly been honoured but it’s rare for angling as a key sport to see such awards. I hope it’s the first of many more to come.”

David started fishing aged nine, his first session saw him catch a gudgeon on the Erewash Canal. It was this moment which saw him hooked for life and begin a remarkable journey of volunteering at club, regional, national, and international levels for over 50 years.

His volunteering started in 1968 when he got involved with his local club Long Eaton Victoria AS – a group which he remains General Secretary, Match Secretary and Treasurer of today.

“I took up my first functional role with the Long Eaton club in 1967-68 and went on to represent them at NFA regional level before becoming secretary and chairman of the region and then its representative at national level in 1982 when I joined the NFA’s National Executive,” he said.

“My roles developed from there to include education and development for the first few years and then competitions later.

“I then became chair of competitions and eventually Vice President in 1991 with responsibility for competitions primarily, but also education.

It was his passion for match fishing which saw his establish and organise many of the events we see today, including a diverse mix of National Championships and domestic competitions including Fish O’ Mania.

“Along the way I’ve organised or overseen probably 150 Nationals of all types, organised two World Championships – the Nations event in 1994 at Holme Pierrepont and the Ladies at Furzton Lakes at Milton Keynes in 2003 – and assisted with the Veterans World Champs in 2009 and the European Champs in 2000 on the Trent Embankment.

“I’m still involved with competitions with the Angling Trust, several clubs, and other organisations including the Canal and Rivers Trust and I’m currently representing the 240 customer clubs within CRT on the National Council and their fisheries advisory group, trying to help to resolve issues between clubs and other canal users.”

Along with his commitments to a busy match calendar each season, David was instrumental in getting fishing into schools and continues his work in that area to this day.

“I’m still involved with project with a school for children with special needs and were going to take them fishing and on a boat trip on the canal soon, so they get an appreciation of all aspects of our waterways. The payback is they’re going to help the local clubs with litter picking in those areas too.

“I think we probably could have been more proactive about getting angling into schools in the past, but I think it’s happening now and there are schemes in place which are helping to do that. It’s critical that we link what we’re trying to do with the curriculum – which is the basis of the current project – and I think we’ve got a good chance of success now.”

Angling Trust CEO, Jamie Cook, was first to congratulate David and thank him for his dedication on behalf of anglers all over the country.

“I am delighted that David’s contribution to the angling community has been recognised with an official honour,” said Jamie. “It is only when you dig under the surface that you begin to truly understand the depth of David’s commitment, his drive, and the volume of unpaid voluntary hours he has put into our sport.

“Most striking is the difference David’s work has made to so many individuals and community clubs across 50 years of voluntary service.

“On behalf of all at the Angling Trust I would offer my thanks and congratulations to David Kent, a remarkable individual and true ambassador for angling.”